“The Goldilocks Principle” – Determining How to Start a Global Marketing Effort

After years of experience helping organizations go global, we've see so many patterns repeat themselves. It’s rather like the story of Goldilocks and the Three Bears: don’t go for the biggest, hottest bowl of porridge first or you may burn yourself. The same holds true when embarking upon a global marketing effort – it may be dangerous to jump into the global marketplace with two feet, expanding too quickly, too broadly. By instead treading cautiously, strategically, and more thoughtfully, you will have much greater success in the long run. 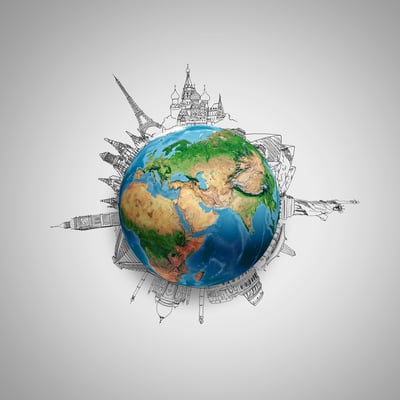 Cultural norms vary from one international market to another. Although nothing may be set in stone, each country or region definitely operates differently, according to local customs and traditions. So, it’s important to learn what those rules are and follow them!

On the Global Marketing Show podcast episode #14, “When a Startup Goes Global,” guest Brittany Cooper, a Marketing Automation Specialist at the mobility solutions company Passport, relays her first-hand experience about what to avoid in a global launch. When she first began a job at an international startup in the travel business, Cooper had little marketing experience. She and her equally naive colleagues began their jobs overly eager, and nervous: “We started creating messaging and ads to be distributed around the world, and quickly learned that there are rules,” she says. “We had no idea that we would encounter cultural differences in different markets.”

Clearly unprepared for what they faced, the group quickly learned that they were in over their heads. Yet by doing everything simultaneously they benefited from getting immediate feedback about their mistakes. That feedback allowed them to pivot direction and pull back. After spending a few weeks experimenting with various messages, especially in social media, they were able to grow and learn how to change quickly. Using a local app, they partnered with in-country tour guides so that people could connect directly on the app. They discovered that though they had a great idea, it was marketed all wrong—although both tour guides and users were enthusiastic about the product, and the two years spent developing the app resulted in a beautiful product, the marketing team had been brought in much too late to the process to be successful.

“We were running ads as soon as the app went live, we had so little experience in international marketing!” says Cooper. “Tour guides were up in arms on Facebook and Instagram. We didn’t realize that there were required licenses and background checks for tour companies and guides. Without any legal counsel then, we had no idea what we were doing.” As a result, the company had to pull ads out of Asia, Africa, and other parts of the world. After this first wakeup call, they realized that they had approached the launch all wrong.

Include Marketing Early and Have a Strategic Plan

So, what is the best way to approach a global launch?

Looking back at the startup’s experience, Cooper describes a host of approaches that in retrospect seem ill-planned and inappropriate, saying: “We had this passion for travel and all these ideas, but we were really naive about what it would take to be successful and get it off the ground internationally.”

Learn more about creating a global marketing strategy in our blog “Expanding into Multilingual Markets Requires a Strategy.”

Include Translation in Your Marketing Strategy

As they began to launch ads, for instance, they relied solely on English rather than translating the messages. As a result, they lost out on a significant number of potential markets. Yet once they began to translate the ads they received great responses.

They began their translation approach by choosing languages they knew, or where they had local contacts, which is often an appropriate strategy when just beginning one’s global launch. In Finland, for example, the response was tremendous because they had created a more tailored approach in the local language, translated by a local contact.

What advice would Cooper give to others, and what would they have done differently?

About the Author - Hannah Pentz

Hannah Feldman Pentz is an experienced marketer and content communicator, especially for professional services, B2B, and inbound marketing. She has extensive experience working with management consulting firms, helping them to create and implement marketing plans geared toward Fortune 500 global companies, as well as smaller non-profits. A graduate of Vassar College, (B.A., English) Hannah and her family live in the Boston area.