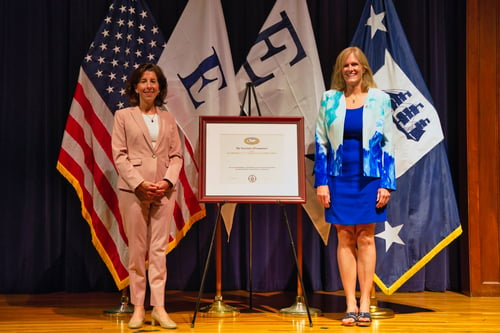 Boston, MA and Lincoln, NE, July 21, 2022 – Rapport International, a multilingual communications company providing written translation and spoken interpretation services in over 200 languages, today announced receipt of the prestigious “E” Award for Export Service from the United States Department of Commerce. Now in its 61st year, the award is the highest recognition a US entity can receive for its contribution toward the expansion of US exports.

“U.S. exports are a crucial component of our global commercial engagement and example of our competitiveness in the global marketplace,” said Gina Raimondo, US Secretary of Commerce. “I’m thrilled to recognize the achievements of this year’s recipients for showcasing the innovation and dynamism that is characteristic of America’s private sector.”

Rapport International is one of only five service providers to receive the honor this year; in total, 19 entities from 15 states received the award. In 2021 alone, Rapport International supported over 150 companies in their globalization efforts, providing translation management strategies designed specifically for cross-cultural understanding. Culturally adapted translation is key to international success for US companies and likewise, for overseas companies entering the US, especially within the life sciences, biotech, manufacturing, and ecommerce industries.

“We help companies start and grow their global presence with appropriate language and cultural respect and understanding,” said Wendy Pease, Owner and President of Rapport International. “Our team at Rapport International is so proud of the recognition for their hard work. And we appreciate that it focuses on celebrating our larger mission of connecting people across borders and cultures.”

In her opening remarks, Secretary Raimondo underscored the unique nature of this year’s awards, held in person for the first time since the start of the pandemic. She noted the recipients’ “remarkable resilience during the pandemic,” which severely disrupted global trade and international supply chains, and their combined contribution of nearly $1.5 billion of goods and services exports over the past four years as critical to domestic economic recovery.

The President’s “E” Award was created in 1961 by Executive Order of the President and is now comprised of four distinct categories:


For more information on the benefits of exporting, or to nominate a global advocate for an “E” Award, visit www.trade.gov.

With offices in Boston, MA and Lincoln, NE, and clients around the world, Rapport International specializes in multilingual communications, providing written language translation and spoken interpretation services that are accurate and culturally appropriate. We use the right voice and the correct terminology to avoid liability, customize services to your needs, and deliver on time and within your budget. With our 100% satisfaction guarantee, you can trust that it’s done right.